The Susan Dwight Bliss room is located on the second floor of Hubbard Hall and has been a treasure of the College since 1945. The room contains the antique Italian ceiling and French woodwork from the library of the Bliss’s 1908 Manhattan residence, which was located at 9 East 68th Street.  The Bliss home was designed by Heins and LaFarge in 1907 for Jeanette Dwight Bliss, the widow of George T. Bliss, a banker who died of appendicitis in 1901. The house included an assortment of antique European interiors and architectural elements, some of which Mrs. Bliss purchased at the famed 1906 estate sale of well-known Beaux Arts architect Stanford White. 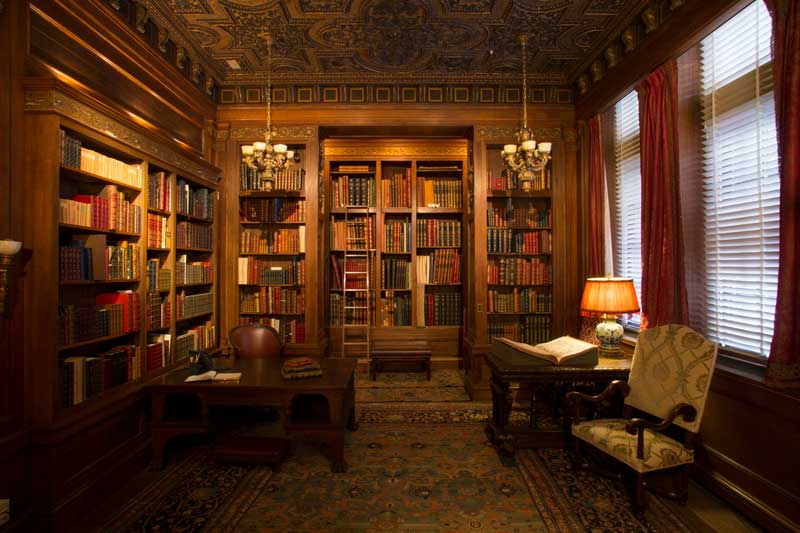 By the 1940s, Susan Dwight Bliss had inherited the family home and began downsizing, removing antique interiors and donating them to a variety of institutions, including the Metropolitan Museum of Art. Bliss gave the library, its furnishings, and eventually many of its books, to the College. She also presented nearly 1,000 fine prints now held by the Bowdoin College Museum of Art, a smaller music room (installed in Gibson Hall), as well as numerous fine furnishings. Bliss's motives for donating these materials to Bowdoin College are unknown.  She had no immediate connections to the College, although made regularly visits Bowdoin and its art museum as she traveled through Brunswick to her Bar Harbor summer home.

McKim, Mead & White, the College architects at the time of the gift of the Bliss Room, designed the installation of the various architectural components in the Hubbard Hall space, replacing a seminar room and office in what was then the College library. The room initially served to house Bowdoin College’s rare book collection, until the College received a selection of Bliss’s own books to house there beginning in the 1950s.

Among the interesting features of the Bliss Room are the antique ceiling and the mantelpiece, which are both fine examples of sixteenth century Italian Renaissance art. The ceiling, originally in a Neapolitan palazzo, is executed in carved and gilded wood and gesso, with five contemporary paintings of religious and allegorical subjects in the panels. Other carved statues decorate the book cases. The mantelpiece is of Istrian stone. The room’s woodwork is French walnut, having a satin finish of rubbed wax and decorated with gilded ornamentation. Most of the furnishings, including two handsome Italian Renaissance tables, were included in the gift.

Susan Dwight Bliss was a collector, philanthropist, and volunteer for organizations concerned with the social and medical welfare of children and of psychiatric patients. She was born in 1882 to Jeanette Atwater Dwight Bliss (1852-1924) and George T. Bliss (1851-1901), who were prolific collectors of art, manuscripts, and books. Their only child, Bliss inherited the family’s Manhattan residence and valuable books and artworks upon her parents’ deaths. She continued to collect avidly, amassing impressive collections of fine and rare books as well as a wide-ranging collection of art. Bliss was a founding member of the social services executive board of Mount Sinai St. Luke's Hospital in New York and served for many years on the hospital's Auxiliary. She left her extensive collection of autographs and French manuscripts to Harvard, endowed a chair in epidemiology at Yale, and gave land for a nature center in New Canaan, Connecticut, on the site of her former arboretum. Bliss died in 1966.

The Susan Dwight Bliss book collection was donated anonymously to the College by Bliss between the early 1950s and 1965.  It contains about 1,200 volumes relating primarily to the fine arts, French and English history and literature, and European and Asian travel. The collection was begun by Bliss's father, George T. Bliss; she shared his passion for books and continued to expand the collection after his death in 1901.

The book collection is particularly noted for its many examples of fine and elaborate European bindings by such masters as Riviere and Son, Chambolle-Duru, Zaehnsdorf, Marius-Michel, Gruel, Bradstreet, Taffin, Meunier, and others. Many of these fine-bound volumes were acquired from the renowned Hoe sales of the late nineteenth century.

All the titles in this non-circulating collection are included in the Library's online catalog. They are available for research use by inquiring at Special Collections & Archives on the third floor of the Hawthorne-Longfellow Library.

» Browse CBBcat, the Library’s catalog, for the Bliss Book Collection.

Bowdoin’s Susan Dwight Bliss manuscript collection contains articles, Bowdoin College librarians' reports, and other printed material concerning Susan Dwight Bliss's gifts to the College, as well as material concerning the extended Bliss family. Also includes images of the interior and exterior of the Bliss residence at 9 East 68th Street in New York. The inclusive dates for the collection are 1906-1990, though the bulk of material dates from 1944-1990; the collection is 0.25 linear feet.